Esbensen has been active at the forefront of R&D and applied chemometrics since 1980, see CV.
A sample can be downloaded here: Esbetal_PLS_ROSA_2014_final_180315

Esbensen is the sole author of five editions of the highly appreciated textbook: “Multivariate Data Analysis – an Introduction” (33.000 copies in the period 2001-2015), used at university and in-house courses for companies. It has been the literature background for CAMO’s professional courses since 2001. After two decades of continued use, 2017 finally saw completion of the 6.th edition Esbensen & Swarbrick: “Multivariate Data Analysis – An introduction to Multivariate Analysis, Process Analytical Technology and Quality by Design” (to be published ultimo 2017).

Sample copies of the list of contents and chapters 8, 9 and 13 can be downloaded below: 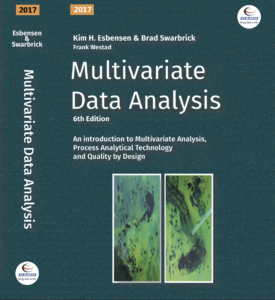