This 2017 textbook keeps the didactic spirit of the first five editions and the personal scope of authors in the way of conveying chemometric knowledge and competence. Methods are always first described in a qualitative way, enhancing the purpose and the general working procedure. Visualization, related to geometrical interpretation of the methods and/or to the way to display and interpret final results, is always a core element in describing the method concepts, which is of invaluable help for beginners as well as more advanced readers. The algebraic definition of algorithms and methods is also available in the last part of the chapters to complete the explanation of any method. There is always an interesting summary to wrap up the most important concepts of every chapter.

As far as contents are concerned, this 5.th edition is a thorough and updated revision of the editions since 2000. None of the core contents of the previous edition have disappeared, but some have been reformulated and several new chapters have shown up as a way of following recent developments. From the point of view of novelties, the introduction of the Theory of Sampling (TOS) is one of the most relevant additions, as this is now an essential part of chemometrics. Clear updates paralleling the general data modelling progress from a practical industrial side, such as chapter 13 on QbD and PAT, were also needed. Chapter 12 introduces the necessary concept of factor rotation, meant to improve/simplify interpretability of abstract PCA models. Notably in this context, multivariate curve resolution is described, since it is the most generalized tool for the chemically meaningful interpretation of multicomponent systems nowadays.

A significant update and enlargement of contents is seen in several chapters. A clear example is chapter 2 on basic statistics, very limited in the previous edition, which now addresses well the fundamentals related to the definition of statistical parameters, statistical inference and use of statistics in particular applied contexts, e.g., control charts. In chapter 9, devoted to classification methods, where only the SIMCA approach was presented in the previous edition, is now clearly augmented improved with inclusion of unsupervised methods and supervised regression-based approaches, such as PLS-DA, nowadays also widely used for certain classification problems. Non-linear methodologies are also suggested in this chapter. Several relevant aspects related to chemometric methods and/or analytical measurements in general, such as pre-processing and replication, have now separate dedicated chapters, which enhance the essential role of both actions affecting the final results and the conclusions obtainable. These two points were admittedly already tackled to some degree in the previous edition, but were only found scattered among several chapters and their real importance could thereby possibly more easily be missed.

As in previous editions, all chapters are notably accompanied with many illustrative examples for a better understanding of the concepts – and how they work in practice. A significant feature is the complete update of all examples and case histories.

All in all, the book is still to be considered an excellent book to introduce chemometrics in a smooth and user-friendly way, both from a theoretical as well as a practical point of view. It is certainly good supporting material for chemometric teaching at undergraduate and graduate levels in chemistry and assuredly in many related scientific fields, and a very good self-learning basis for anyone wanting to use chemometric methods in industry or academia. 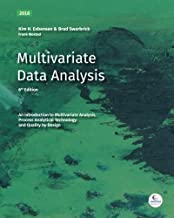